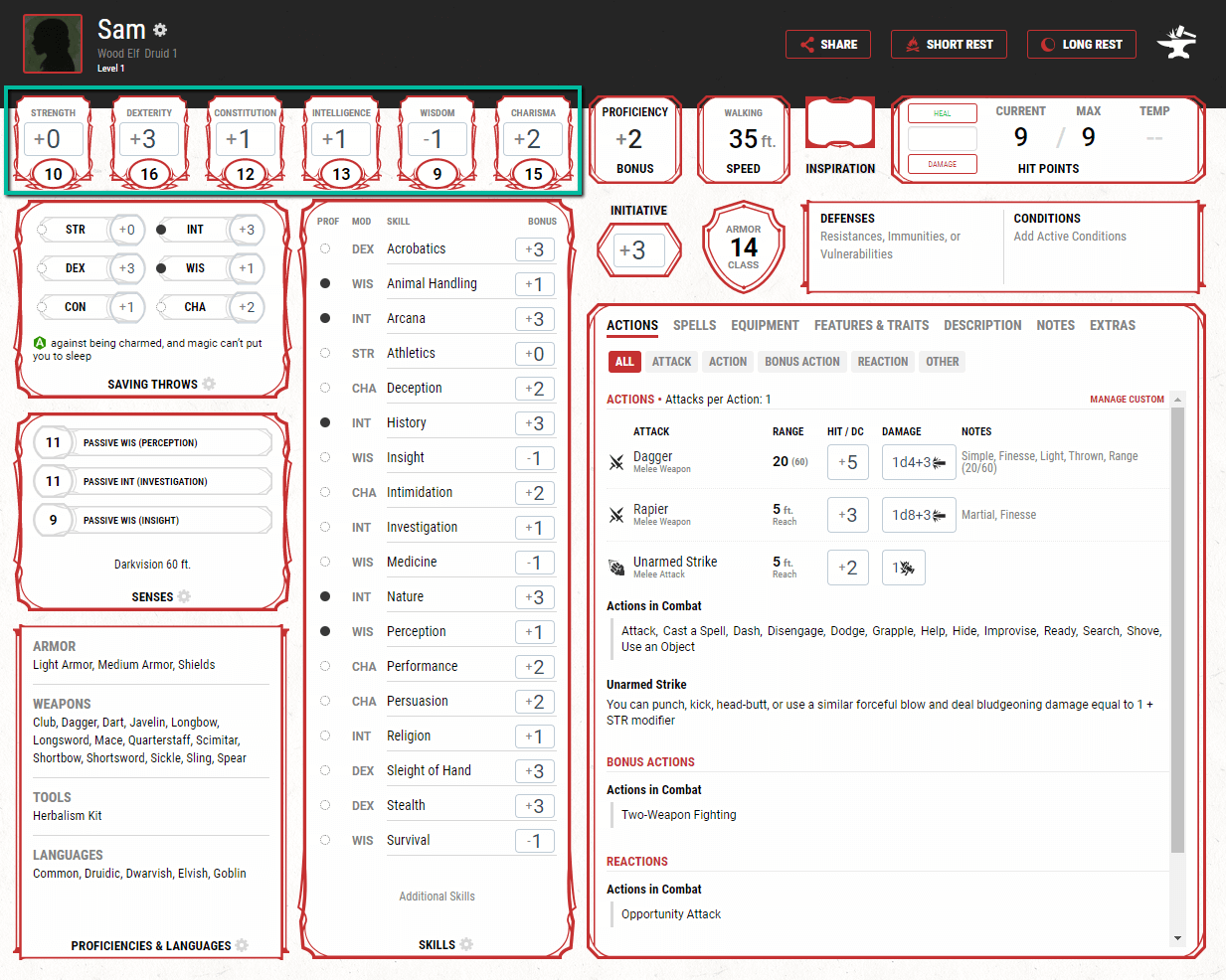 Abilities describe your character at a fundamental level. Are they strong, aware, or intelligent? Are they agile, resilient, or charismatic? Your scores determine those answers. You’ll also notice a second smaller number like -1, 0, +1, etc. These are your ability modifiers. Based on what you’re good or bad at, these numbers vary and determine how you perform at an action based on that ability. For instance, if you’re strong and have a +4 to strength, you’ll be more likely to succeed at a strength-based action whereas if you have a -1 intelligence, you might want to avoid challenging that clever wizard at a game of fantasy chess.

TL;DR: Abilities define your character at a fundamental level.

Inspiration varies by dungeon master, but generally it’s awarded in our games to characters who do something heroic, selfless, or maybe a little crazy. Players can then spend that inspiration point to gain advantage on a future roll.

Proficiency Bonus is a flat value you receive from your class that slowly increases as you level. It is used on skills, saving throws, weapons, and tools that you have proficiency with. Basically it means your character has trained and become good at something and you get to add this bonus to it as a result. For example, your character reads a lot and you’ve become proficient in history and religion checks as a result. It represents all the extra knowledge you have about various topics in the world whereas you haven’t spent time out in nature surviving off the land so you’re not proficient in nature and survival checks.

TL;DR: Inspiration is granted when you’re awesome. Proficiency Bonus is used for stuff you’re good at. 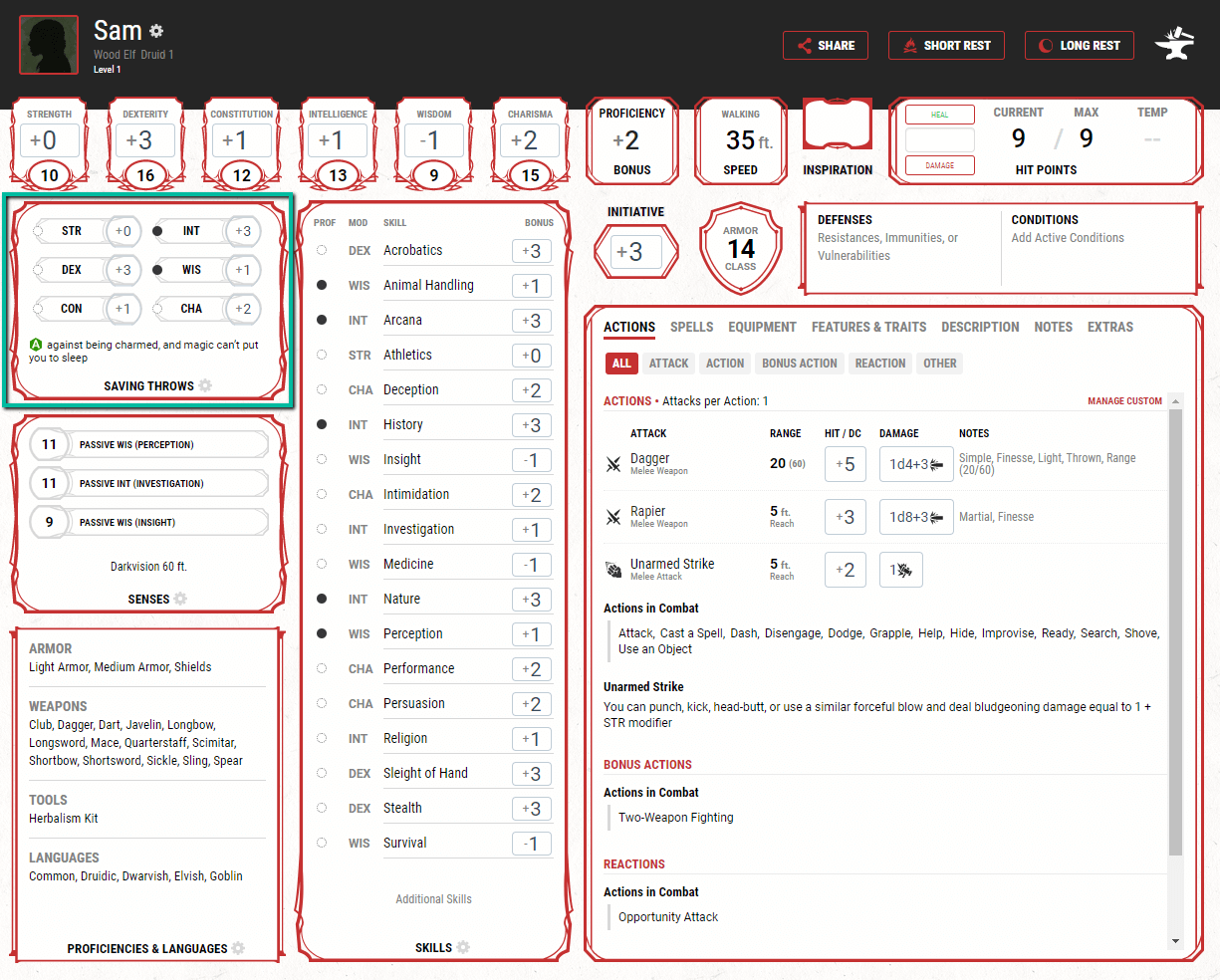 TL;DR: When things go wrong and you need to save yourself from impending disaster. 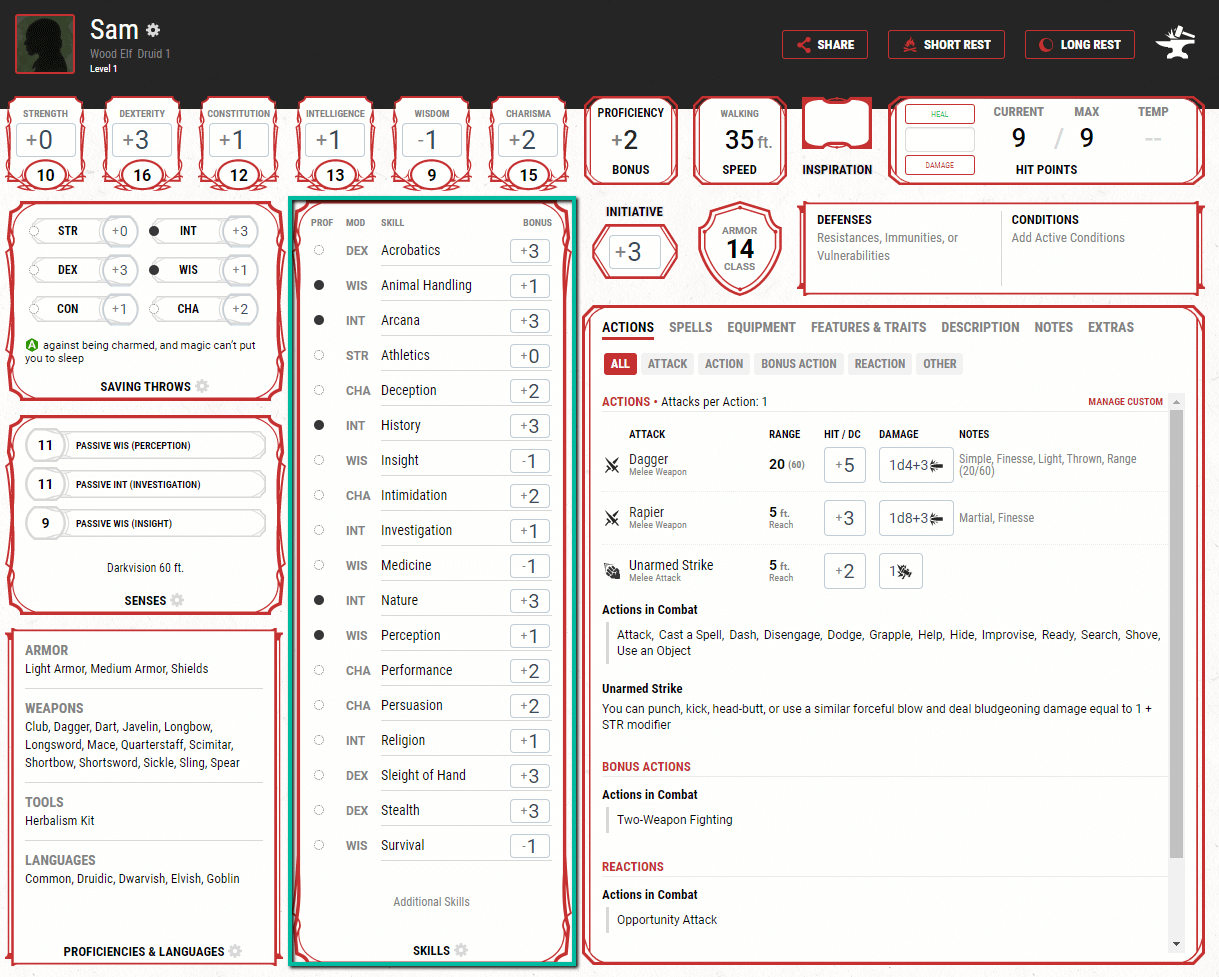 Skills cover a wide range of actions you can take in the world. Most everything you want to do while playing D&D will be covered by some sort of skill check. Here are a few examples:

Skills are great to reference frequently because they can give you creative ideas for solving problems in the world. Darkened circles are skills you’re proficient at. If an action is not covered by a skill, then we fall back to a core ability check instead. A good example of this is when you’re trying to socialize with people, but don’t want to make a persuasion, intimidation, or deception check. You can make a raw charisma check instead. These are based on a 1d20 roll.

TL;DR: These are the actions you can take in the world. 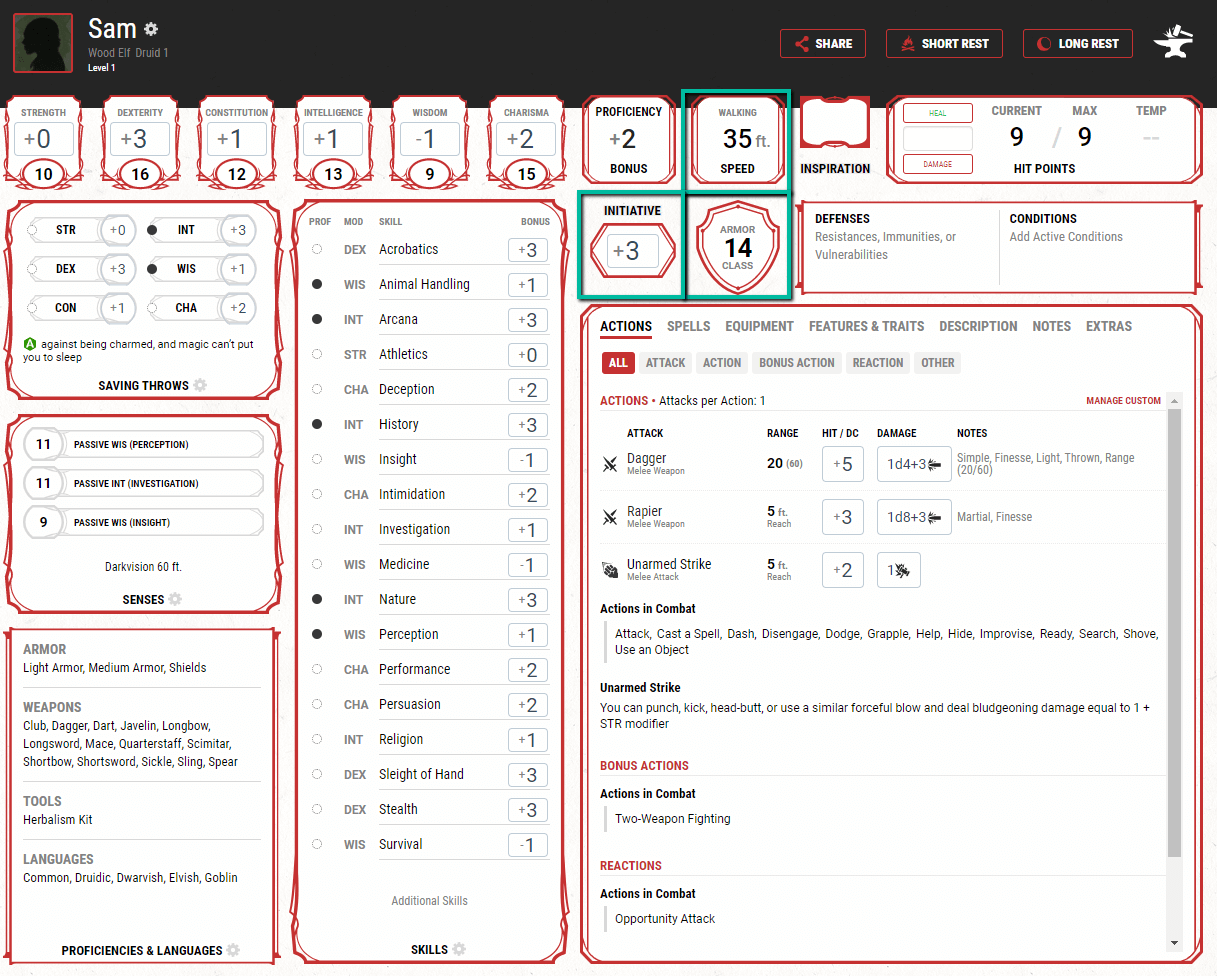 Initiative is a value based on your dexterity that you use when going into combat. Roll 1d20 and add your initiative bonus to determine where you rank in the order of combat.

Speed is how far you can move during your turn in combat (and possibly in other specific scenarios outside of combat). Usually people play on a grid or battlemat and each square is 5 feet. If you have a speed of 30 feet you can move 6 squares per turn (unless you take the Dash action which doubles your speed at the cost of your action).

TL;DR: Armor class determines whether you or a monster gets hit. Initiative determines your order in combat. Speed determines how far you can move on your turn. 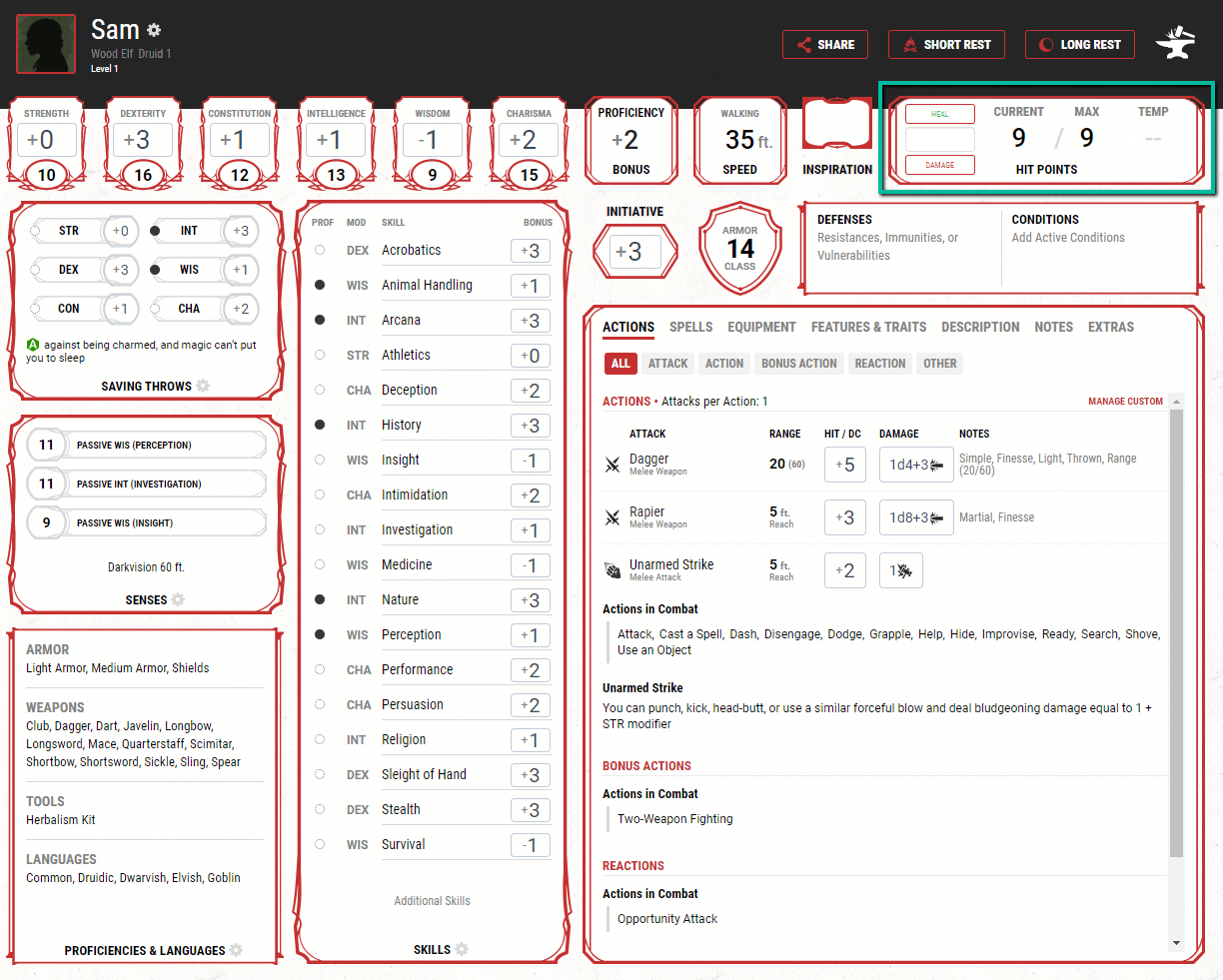 Current and Maximum Hit Points represent your health and are subtracted from as you take damage. If you reach 0 or less hit points, you fall unconscious and start fighting for your life.

Temporary Hit Points stack on top of your normal hit points and are subtracted from first. These come from spells and other sources like a magical item or potion. They generally expire after a certain amount of time has passed.

TL;DR: This is your health and if you run out you’re dead. 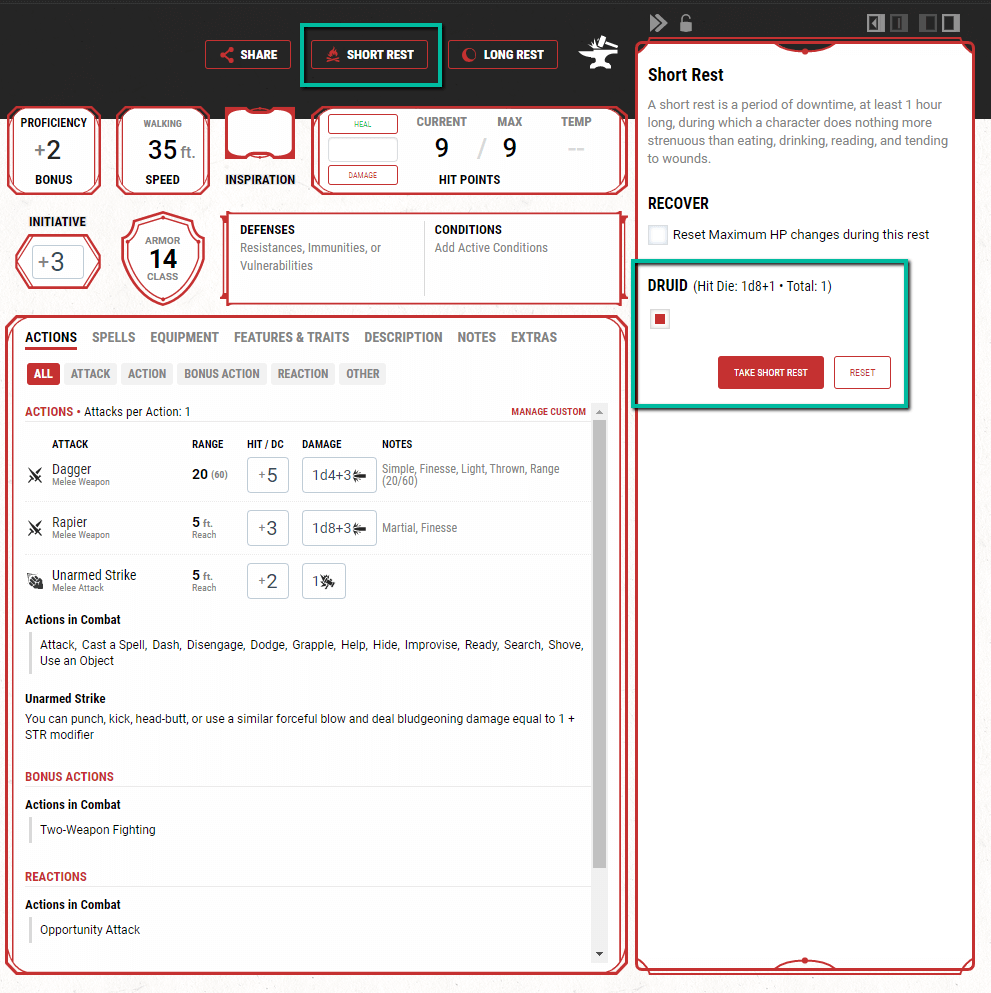 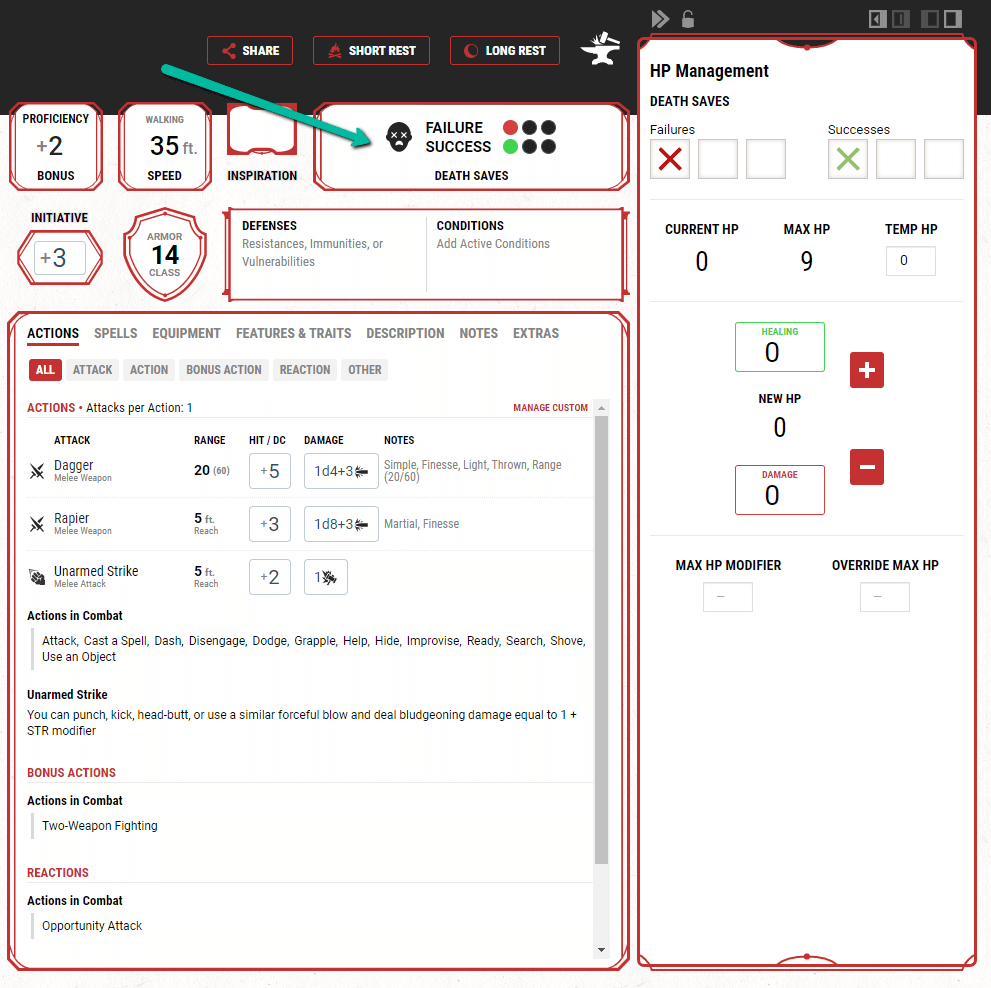 Hit Dice are granted each level and can be spent during a short rest to recover hit points. Once spent, you need to take a long rest to recover some or all of them (depending on your level and how many you spent).

Death Saves are the worst-case scenario and represent your character fighting for their life. Roll 1d20. 10 or higher is a success with a crit 20 bringing you back with 1 HP. 9 or lower is a failure and brings you one step closer to death. A natural 1 results in 2 failures and any damage taken while at 0 hit points can give you another failure or kill you outright.

TL;DR: Hit Dice can be spent to heal. Death Saves are the danger zone. 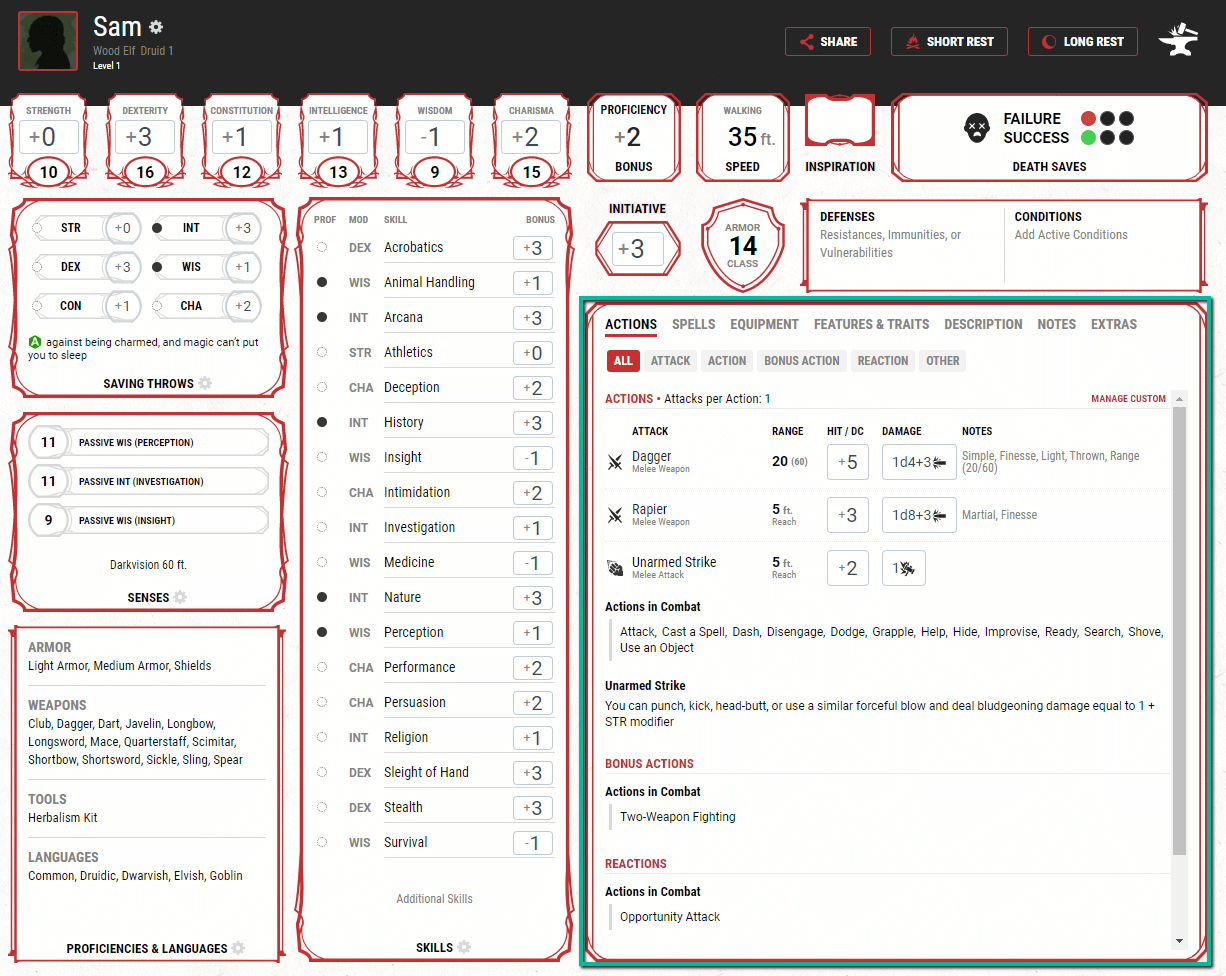 This box contains your weapons and attacks. You’ll notice things like Shortsword, Longbow, Scimitar, and others. They have a number next to them and then a damage die like 1d8+2. These are what you use to attack enemies at range or in melee combat. First you roll a d20 and add your attack bonus (the number in the middle). If that value meets or exceeds the armor class of your enemy, it’s a hit! If it’s lower, you missed. If you hit, you get to roll damage. For example, you have a Longbow and roll 1d20 to attack. You add +4 and end up with a 16. Pretty good! That beats the monster’s armor class and so you roll 1d8+2. The total is 6 which is the damage the enemy would take from your shot.

TL;DR: These are your weapons and you attack stuff with them.

These oval shapes contain your money. From top to bottom it goes: copper pieces, silver pieces, electrum pieces, gold pieces, and platinum pieces. Usually your character starts with some amount of gold. You can calculate your starting wealth and see exchange rates on page 143 in the Player’s Handbook (PHB). You also receive starting gold from selecting a background.

TL;DR: This is your money. 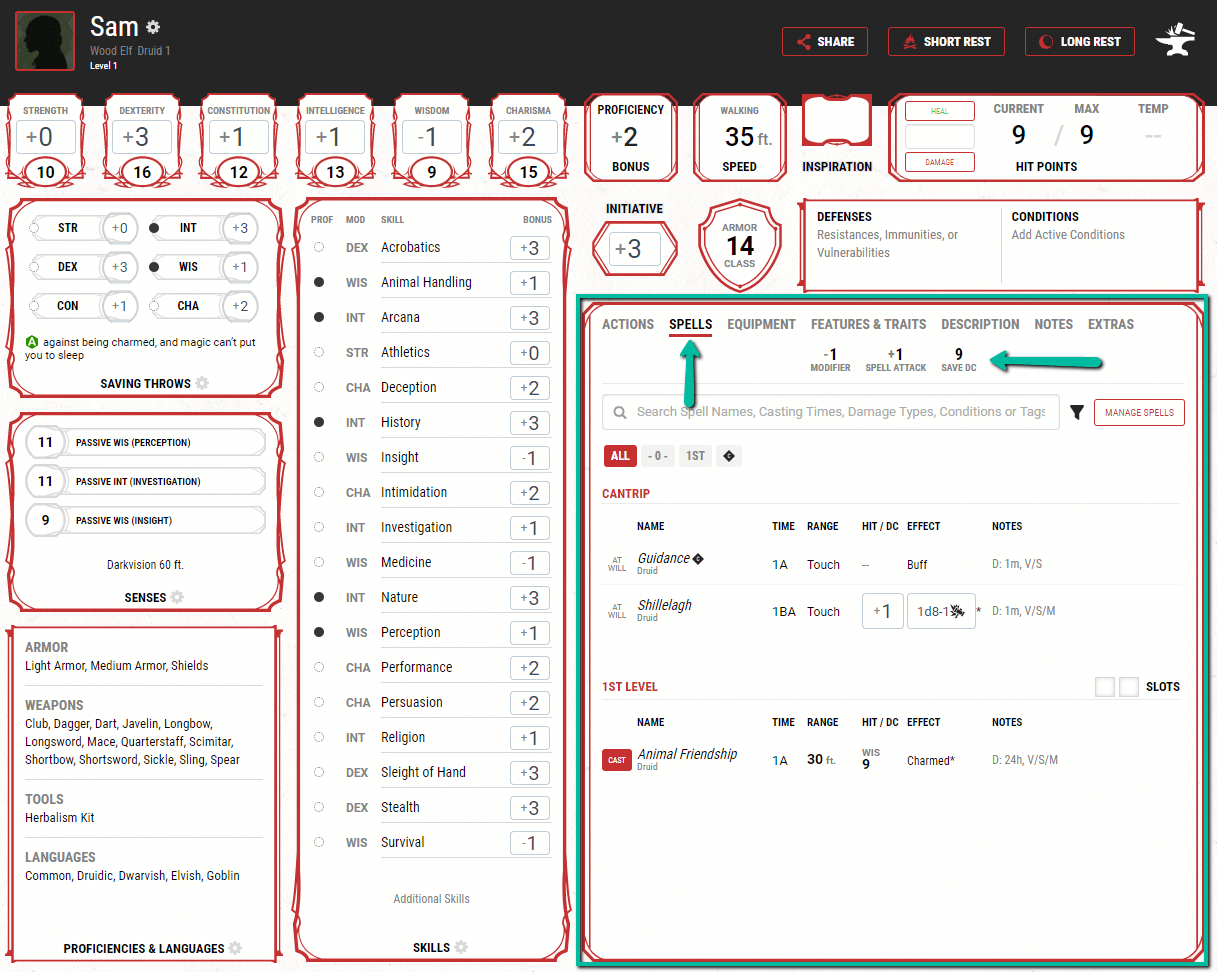 Your Spell Attack Bonus is generally added to ranged spell attacks like Firebolt. You cast the spell and attempt to strike your opponent with it. Roll 1d20 and add your spell attack bonus to the value. If it meets or exceeds their armor class, you hit them with it! Now you can roll damage.

TL;DR: Spellcasting Ability is the ability you use for spellcasting. Spell Save DC is what enemies compare their saving throws against. Spell Attack Bonus is added to spell attacks you make against an enemies armor class. 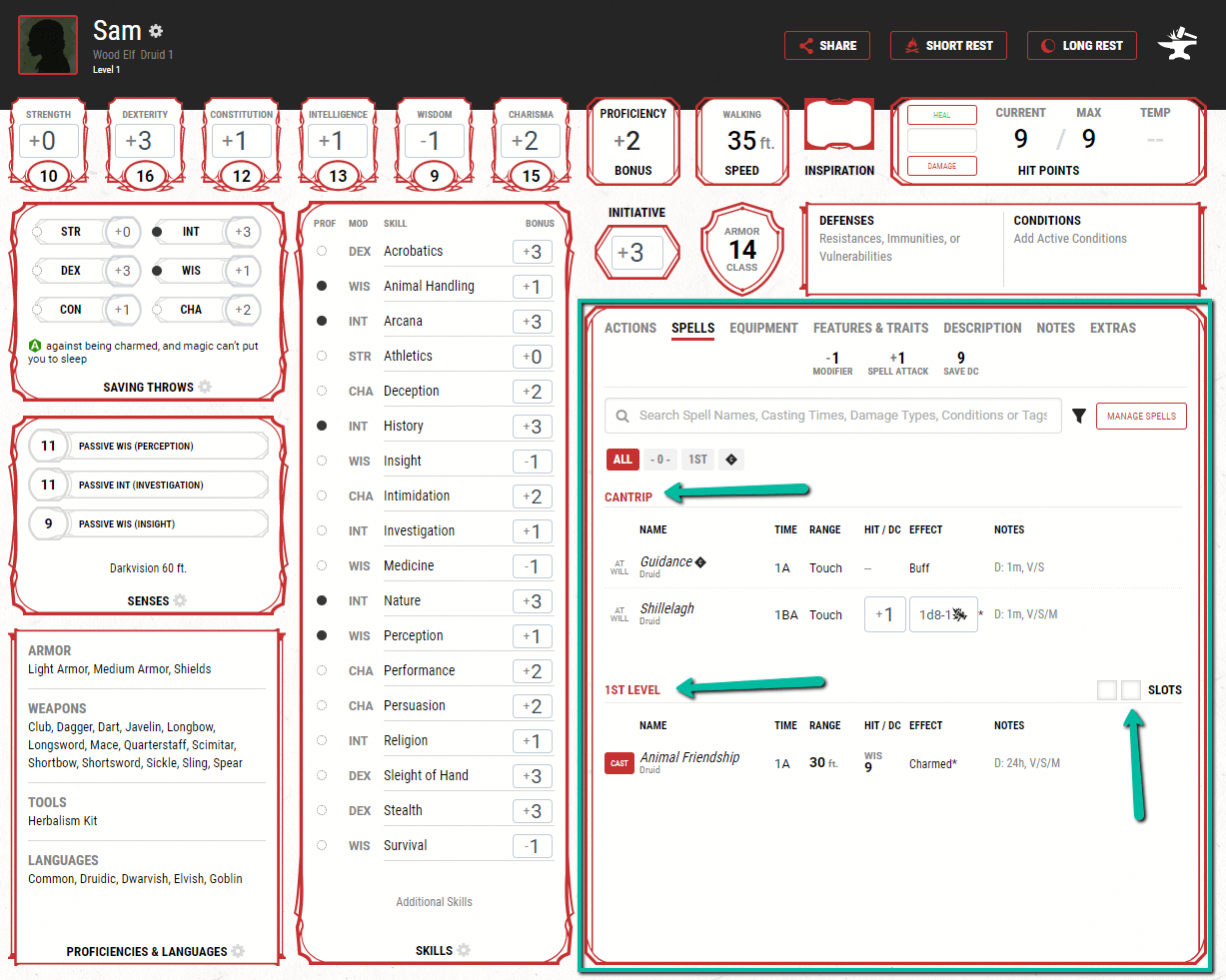 Cantrips are spells that you can cast an unlimited number of times throughout a day. You do not burn spell slots by casting them, but they are generally weaker than normal spells. You also have your cantrips fixed in your mind and do not need to prepare them. They are always available to cast.

Spells are generally more powerful than cantrips and you can only cast a fixed number throughout the day. This is determined by your spell slots which can be thought of like ammunition. Once you run out of ammunition, you need to take a long rest to get more. Depending on your class you will also know some or all of your class spells and can prepare certain spells at the beginning of each day before going out into the world. Prepared spells are darkened in. Depending on your class, there may be additional information about how to cast spells, how to recover spell slots, etc. For the purposes of Newbie Sessions, all we care about is how many spell slots you use per day. This simplification keeps things fun and easy, but be prepared to read through your classes spellcasting section for other DMs or longer-term campaigns. You can also cast the same spell multiple times.

TL;DR: Cantrips are spells that you can cast all the time. Spells have limited uses per day based on your spell slots.

Join our community and begin your adventure today!